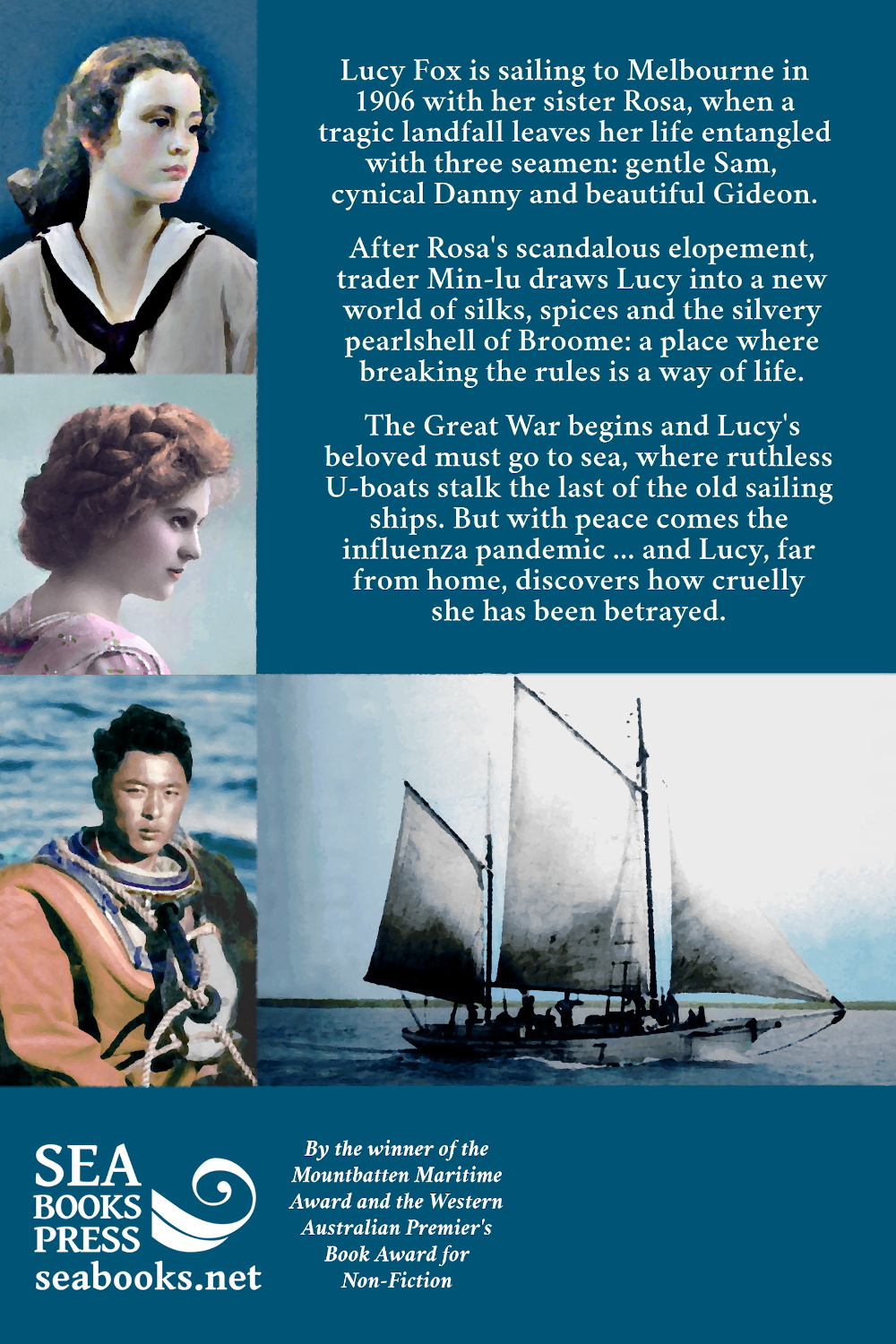 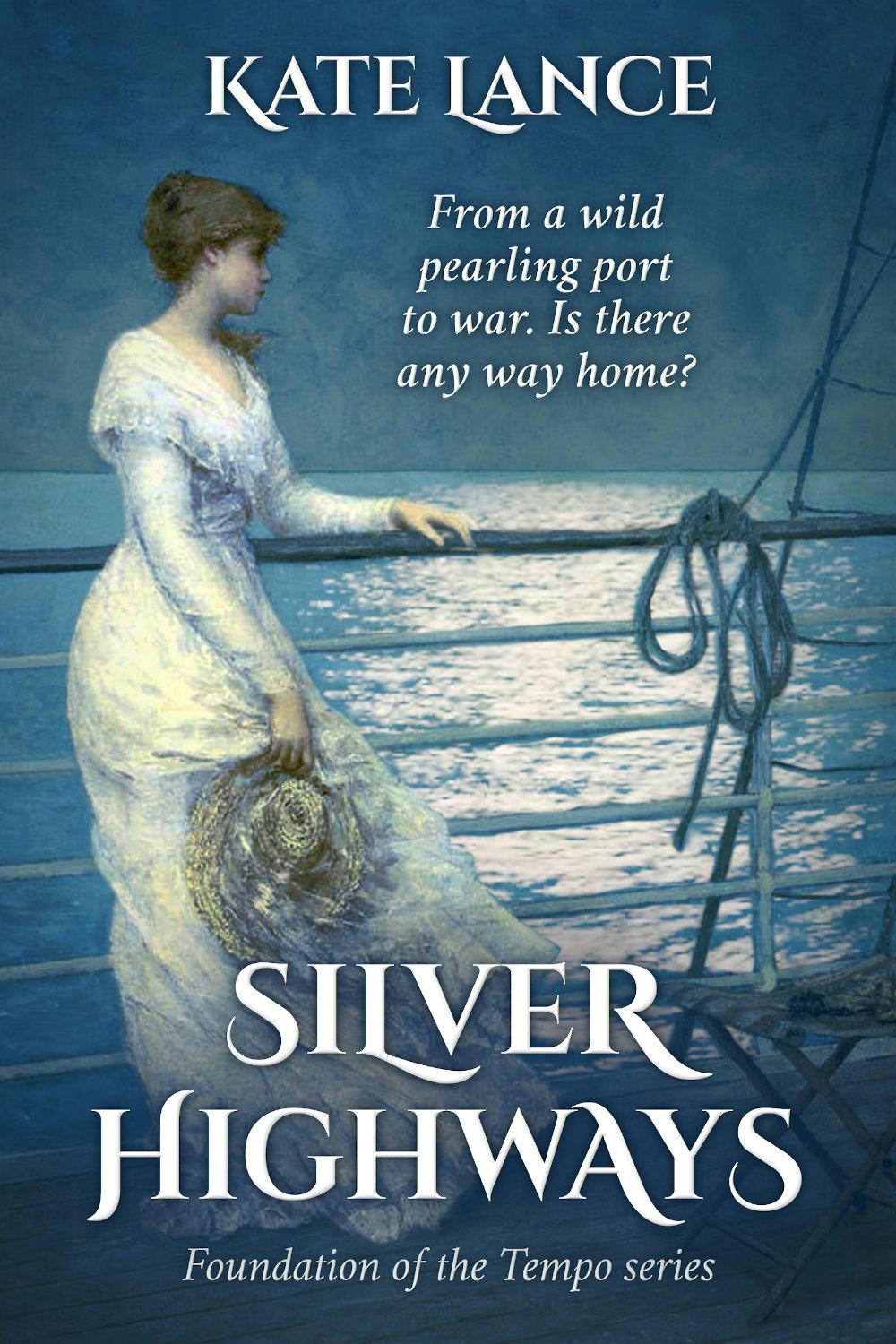 ‘A beautiful and poignant coming-of-age romantic tale that kept me reading from start to finish.’

I started writing Silver Highways a few months before Redbill was published in 2004, and the underlying research began four years before that. It's been a labour of love – hundreds to thousands of hours of writing and re-writing – so if you read it and enjoy it, please recommend it to your friends and give it a review or rating on your favourite book site.

Silver Highways is the foundation of my other novels. Lucy, who relates this story, is the mother of Mike, the protagonist of The Turning Tide, while other characters (and their descendants) are central to most of my fiction. If you’d like to know more about the real pearling luggers and Broome history, try award-winning Redbill: from Pearls to Peace.

Background to the people in Silver Highways

A visit to the Chinese Museum in Melbourne told me about the white women who'd married Chinese men during the depression of the 1890s and found stability and prosperity with their new families. The rabid, racist press of the day described it as "going to the Chinks".

Because of Redbill I already knew that social records of the early days are skewed by the newspapers of the time which, as today, push sales by banging the drums of racism. But as I read through two decades of Broome newspapers I was able to compare what they said with what I knew from more reliable sources had actually happened. It became clear that close personal and business relationships occurred often between the different races in Broome, to everyone's benefit. Despite the sometimes loathsome rhetoric, people simply got along with each other.

This is not to deny that ugly things happened between the racial groupings, and of course life was hard for Aboriginal people, as cruelly dispossessed there as everywhere else. But even in Broome things were different: some relationships became so close that during WWII a number of Aboriginal women followed their Japanese husbands into internment in the cold southern camps rather than be separated.

So I started wondering what would happen to a white family caught up with a Chinese family at a time of great prejudice, not to dwell on the painful aspects but to see what might happen to those willing to appreciate the new world opened up before them. Hence Lucy, charmed at the possibilities:

Heavens, family – with people who drink perfumed tea and trade silks and spices and luminous shells. How interesting life has suddenly become.

Some of the characters were real people. You can read about dashing, complicated Captain Gregory, his soldier brother Dick, and ingenious Mr Yasukichi Murakami in Redbill, although in that I was more discreet about the long love affair between Murakami and beautiful young Theresa Murata. Redbill also contains everything I could discover about 'girl pearler' Lizzie Withers.

And Rosa Gonzales charmed me. In the Broome paper I'd see her name occasionally and imagine a flashing-eyed Spanish matron, but discovered from a photo at Broome Museum she was a tiny, fine-featured Irishwoman from Melbourne who had married a Chinese man. He died after they established their family in Broome, then she married Mr Gonzales from the Philippines and came to own three luggers and the Continental Hotel. One of her children, Billy Sing, was a pearler in 1950s Darwin, a friend of Redbill's then-owner Dick Sonners.

When the Great War started the Broome boys went happily off to fight, and Broome lost a large part of its young white male population, a staggering twenty-five percent. It's heartbreaking to read their letters in the papers, followed by reports of their deaths; especially as the death notices over time go from front-page black-bordered memorials to miserly snippets buried in the ads.

Background to the ships 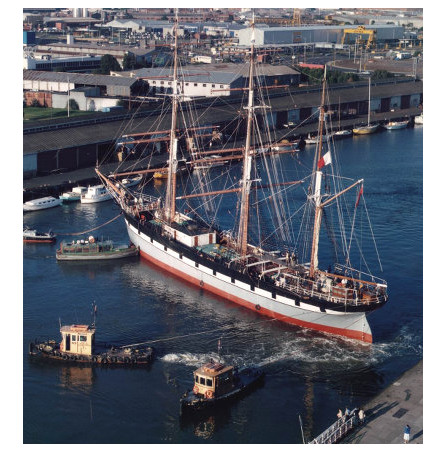 The iron barque Willowmere is based upon Melbourne's magnificently restored Polly Woodside. Here's an image of Polly, probably taken in the 1990s. Click for a larger version and note the sizes of the people watching. (Then see my page on the four-masted vessels for a comparison with ships like my fictional four-masters Culardoch and Inverley.)

Given there are ships in this novel, it's probably not a spoiler to mention that a shipwreck occurs. It grew from a short story I wrote on the loss of the Loch Ard, although fortunately for my characters the outcome was different.

The tragedy of fine 'unsinkable' Koombana is still part of Broome folklore, and reading the unfolding story in the papers as it happened was extraordinary.

Lucy's lugger Sparrow is naturally based on Redbill herself. Sam's other boats Honeyeater, Moorhen, Lyrebird, Mudlark, Egret, Currawong and Shearwater, have names typical of the day, and the Broome pearling vessel numbers I gave them in an early draft of the book, B266 to B273, were from an unassigned set of official 1910 registrations.

By the time I got to writing about the great four-masted barques Culardoch and Inverley I was deep in research for the book Alan Villiers, so they were informed by his passion for those ships.

I drew upon an experience of Rex Clements in A Gypsy of the Horn for Danny Whalen’s ghostly sea story, and By the Wind by Captain J. Murray Lindsay for the fate of a four-masted sailing ship during the Great War. The cover is derived from a Wikipedia public domain image by user Daderot, of the painting Sally by Joseph de Camp, c. 1907, from the Worcester Art Museum, USA.

The devastating cyclone of November 1910 actually ocurred and was the largest ever to hit Broome until Cyclone Rosita in 2000. (But by now you know which book to read to find out about that, don't you?)

Something I never expected: apart from cyclones nothing much ever happened in Broome, so the papers would reproduce news cables from all over the world. This had the odd effect that the small town received an amazing overview of unfolding global events, such as the Great War and the influenza pandemic, with a far broader perspective than the capital cities, whose papers had to also focus on their own local news.

I cannot overstate my gratitude to the libraries that preserved these newspapers and historic records, copied them onto microfilm then made them widely available, so I could sit in the comfort of the State Library of Victoria's reading room and be transported to another time.

The details of those other times, long before the colourful images we're now so used to, don't just come from offical records. Fiction also matters: I read everything I could find about the old days in Broome, and discovered something extraordinary I never saw anywhere else. In the 1933 novel The Pearlers, John Harcourt wrote, "The wood of trodden decks and cabin-tops disappeared between coats of paint as gay as Chinese lanterns, canary-yellow and orange-red and peacock-blue ..."

I had only ever seen monochrome photographs of the early luggers, yet it seems they were decorated in bright colours. With this tiny throw-away detail in a long-forgotten novel, I discovered something about the luggers no one else had ever mentioned – probably because it was so common and everyday. But now, instead of drab grey images unconnected in time and emotion, we see through Lucy's eyes:

Soon there are hundreds of creamy sails and dark hulls and splashes of brilliant colour bobbing on the turquoise water. And then the lovely fleet is drawing away from us and growing dreamlike in the distant haze.