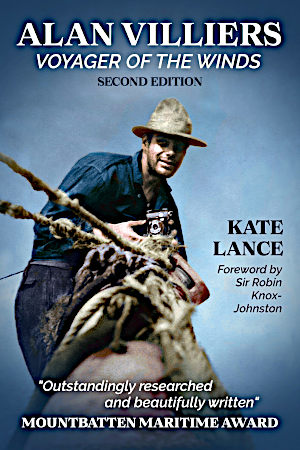 The four-masters were utterly different vessels to the far more common barques and ships with three masts, the classic 'sailing ship' of books and paintings. James Craig and Polly Woodside are good examples of barques (three masts is assumed - the number is usually only specified for the four and five masted vessels). Yes, there were indeed several five-masters – one full-rigged ship Preussen, and five barques, including famous København, tragically loss in 1928.

And the difference between a ship and a barque? A ship has square sails on all masts, while a barque has fore-and-aft sails on the rearmost mast. See more on barques and full-rigged ships. Here's a comparison of a three-masted barque with a four-master, plus a clip-art London bus for scale. Three-masters were big: four-masters breathtaking. 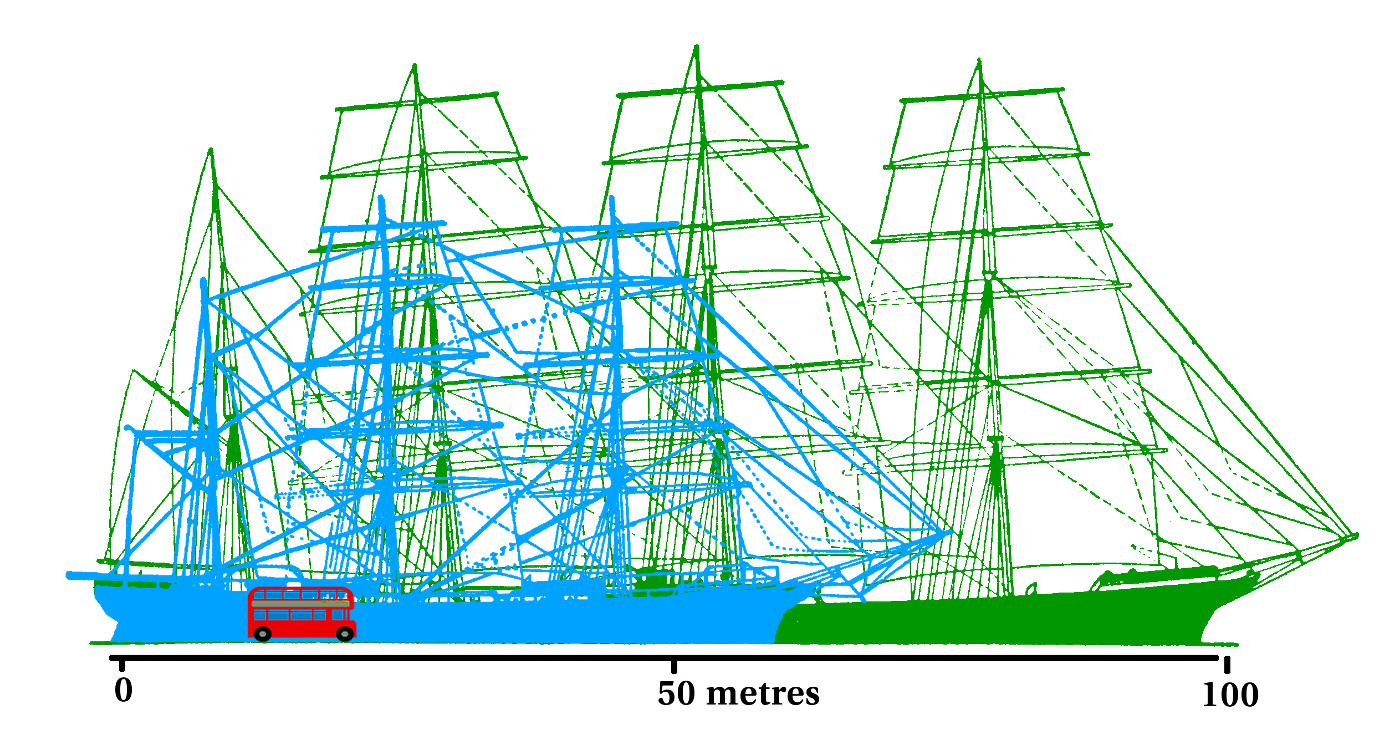 Here are two melancholic ships songs I like – Shipbuilding by Robert Wyatt and The Grey Funnel Line by Delores Keane, Mary Black and Emmylou Harris.

How did the Four-Masters Evolve?

While I was doing this book I compiled the years and places of manufacture of the iron and steel four-masted barques from Lars Bruzelius' Catalogue of Four-Masted Ships and Barques. The catalogue lists 442 four-masted vessels built from 1801 to 1989. Excluding 28 (12 made of wood, 10 converted from steamers, five Japanese ships and one yacht) left a total of 414 iron or steel four-masted barques or ships, all built in a fifty-year period from 1875 to 1926.

Hulls and Rigging Over Time

Here are the vessels plotted over time: iron or steel, barque- or ship-rigged. The change from iron to steel is obvious, as well as the move from full-rigged ships to the more easily sailed barques, with their steep rise in construction in the early 1890s and even more abrupt plummet.

Note: there is a small error in Figure 4 of the first edition of Alan Villiers: ten iron ships were were accidentally not plotted on the histogram: seven for 1878 and three for 1879. This is the corrected graph. (The error did not affect Figure 3, countries of origin, as below.) 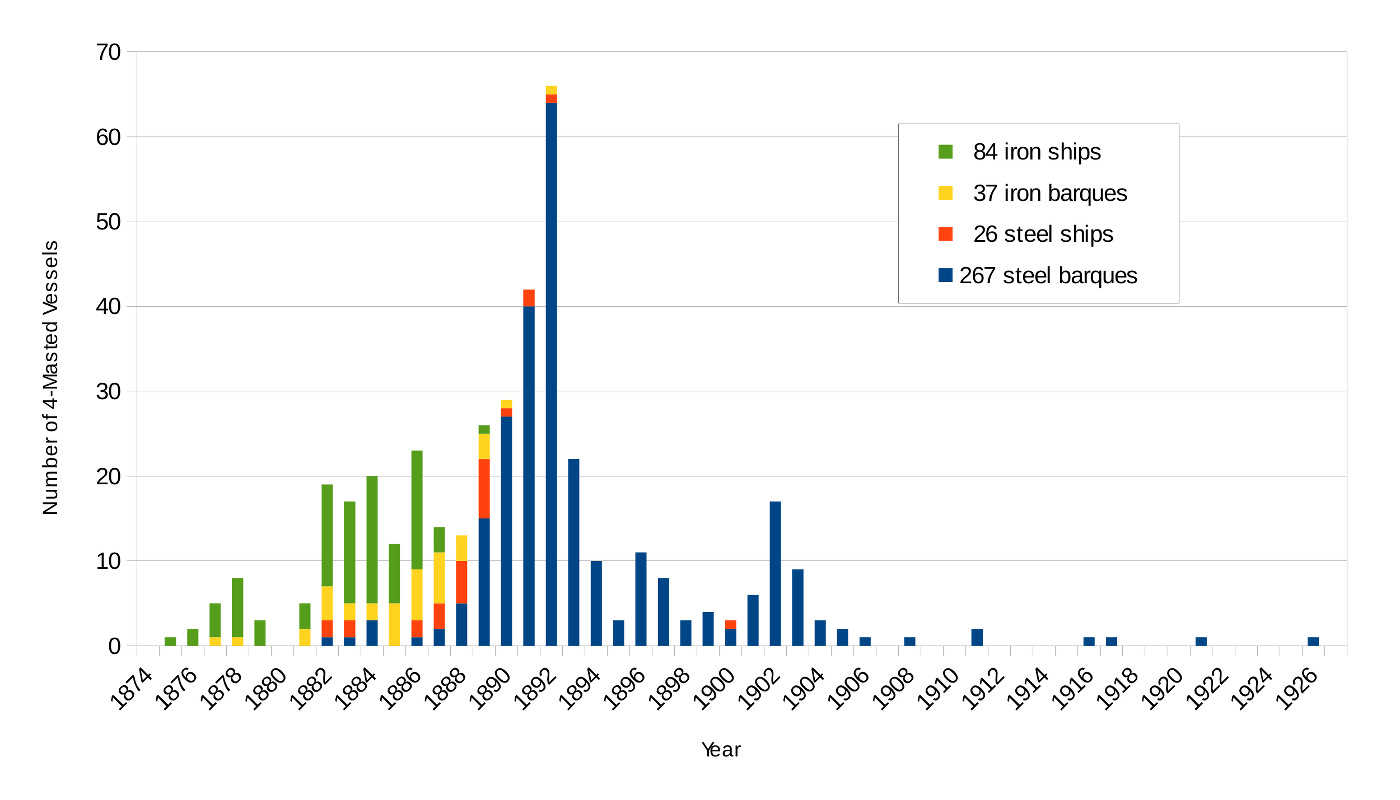 Countries of Origin of the Four-Masters

An extraordinary 84% of the four-masters were built in Britain, followed by 7% in France and 4% Germany. Over the fifty-year era each country had different construction periods, the British first and the Germans towards the end. 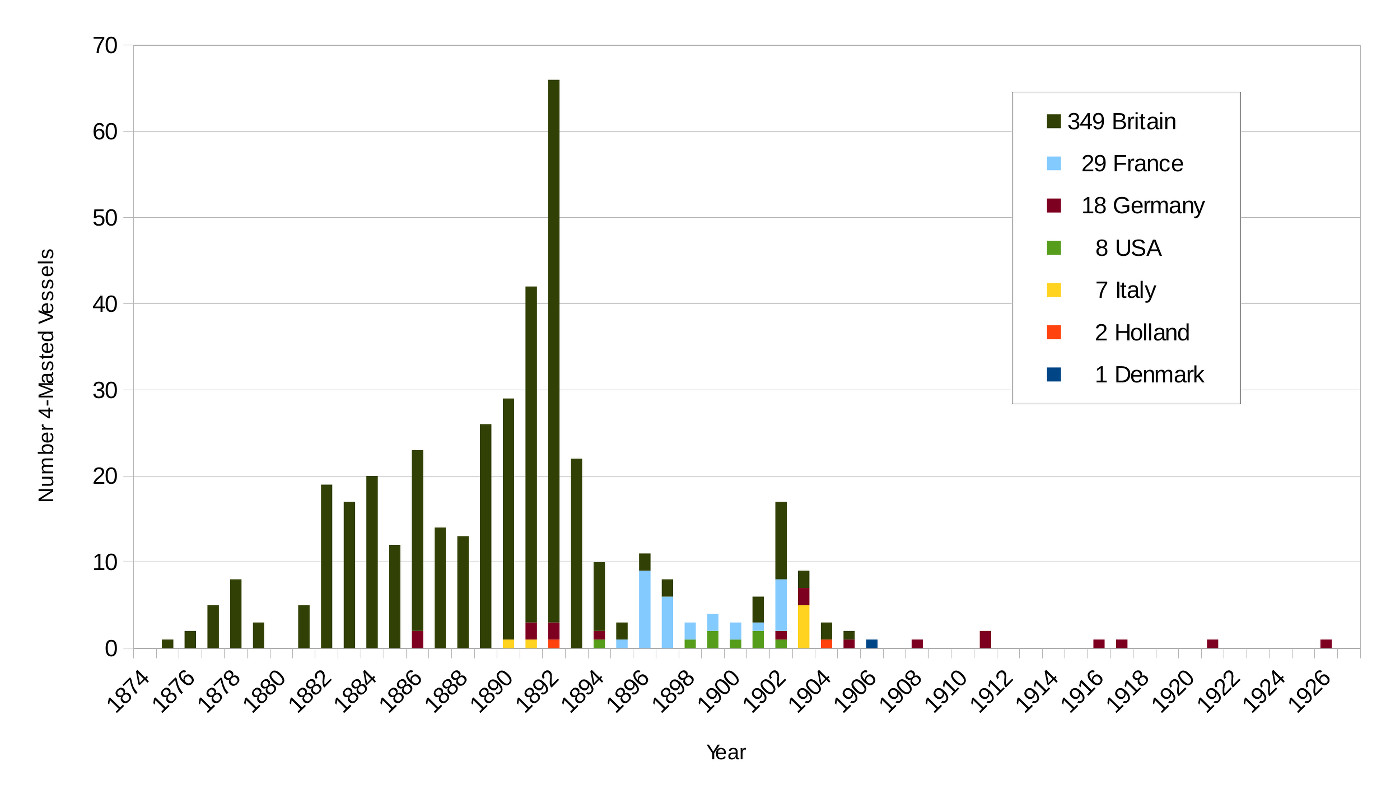 Shipyards of the British Four-Masters

Shipyards on the River Clyde in Scotland built the vast majority of the British four-masters, 62%; followed by 10% from Liverpool, 6% from Sunderland and 5% from Belfast. Here is a breakdown of the British shipyards that built 84% of the world's four-masters, with the number of four-masters that came from each yard. That there were nineteen locations, large and small, around Britain that had the knowledge and skills to build such enormous vessels is amazing.
167 Glasgow
40 Greenock
35 Liverpool
20 Sunderland
19 Belfast
10 Dundee
9 Workington
9 Dumbarton
7 Leith
6 Whitby
5 Stockton
5 Southampton
4 Barrow-in-Furness
3 Maryport
2 Milford-Haven
2 Newcastle
2 Alloa
1 Aberdeen
1 Londonderry 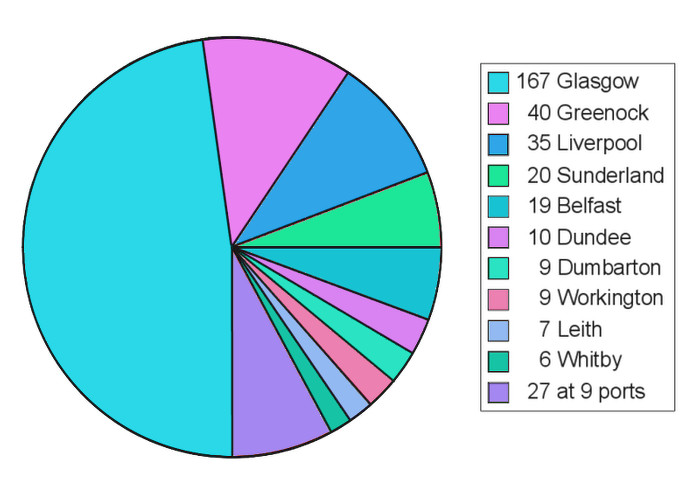 Where Are They Now?

Of the 414 original four-masters, in 2008 only seven barques remained. From Alan Villiers:

Four were once Erikson grain carriers: Moshulu today is a restaurant in Philadelphia and Viking a hotel in Gothenburg, both much altered. Passat is a handsome museum vessel at Travemünde; while honest, unchanged Pommern floats at her home in Mariehamn. The other three were German nitrate carriers: Peking is a museum vessel in New York, while Kruzenshtern (ex-Padua) and Sedov (ex-Magdalene Vinnen) are Russian sail-training vessels. Kruzenshtern recently circumnavigated the globe, while Sedov has sailed more than 300,000 nautical miles in the last forty years. They are the acknowledged monarchs of the square-rigger kingdom.

As I was focused on the European merchant vessels, I left some ships off this list of surviving four-masters, such as luxury yacht Sea Cloud and Japanese training ships Nippon Maru and Kaiwo Maru, which have also been preserved; and Falls of Clyde, the last iron full-rigged ship, which in 2008 was derelict and going to be sunk for a breakwater.

And now, over a decade later?

So a decade after the book appeared, none of the surviving four-masters has been lost, and two that didn't appear to have much of a future will now be preserved. Alan Villiers would certainly have approved.