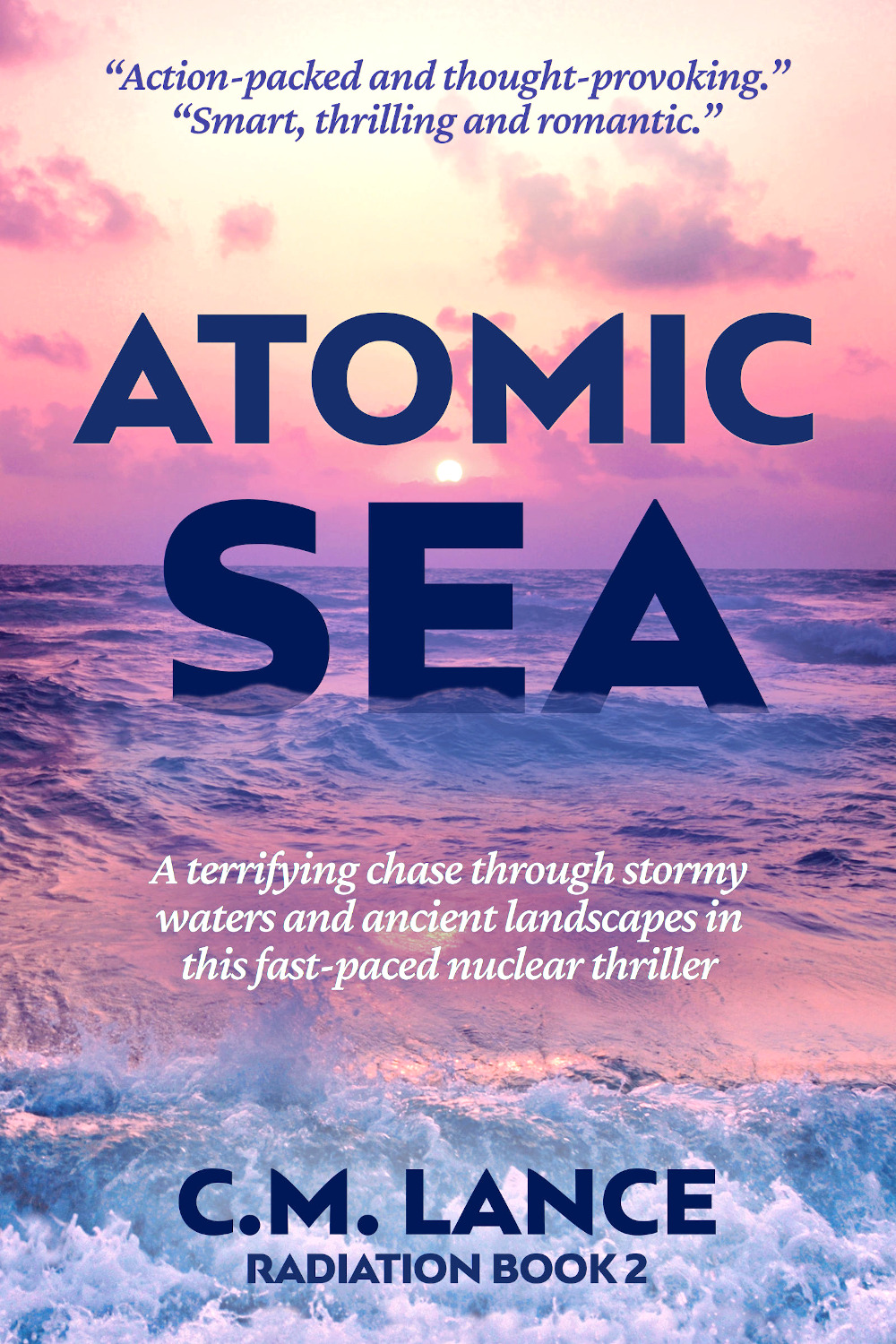 Atomic Sea is a contemporary thriller set in Australia. Some characters appear earlier in The Turning Tide.

Since Redbill I've had a special affection for Broome and north-west Australia and, like most people who don't have shares in multinational gas corporations, I've been appalled at the multi-decades-long desperation of successive Western Australian governments to turn one of the most beautiful regions in the world into an industrial barrens.

Every time it seemed the threat to Walmadan/James Price Point had been defeated, it would return like the undead. Finally (oh please, let it be finally) after massive community resistance the latest gas-plant company realised they were on a hiding to nothing and withdrew for 'economic reasons.'

Anyway, it was very little skin off their collective noses. They already had their gargantuan money-spinning eyesore at Murujuga, didn't they? That's the Burrup Peninsula to those who don't much care that it sits on perhaps the oldest memorial to human civilisation in the world. ('Memorial', of course, because Mr Burrup's mates killed off most of the people who were living there.)

The scarlet rocks of Murujuga once boasted the earliest representation of a human face known to exist on this planet, but someone who didn't much care about that crushed it for roadfill. The landscape of Murujuga is a barely-comprehended resource of universal human importance, and the future will damn today's blinkered governments for their malign negligence.

While I appreciate gas plants have their uses, what is this particular obsession of governments to put industry where it does the most damage, culturally and environmentally, to all of us? It's as if they simply want to wipe their mud-covered boots over the face of humanity itself. I expect the answer lies in in the realm of pathological psychiatry, because it's certainly not just the money – if it were money the boot-wipers would be getting into the booming renewables industry.

In some of the reviews of Redbill and Alan Villiers I was accused by a few hidebound old chaps of showing my 'left-wing' bias although they still enjoyed the books (funny that). My bias – for the benefit of future reviewers – is that I believe in kindness and creativity and living amicably with others and nurturing the true sources of human wealth: earth, plants, animals and people.

My bias is that I believe in putting those obscene amounts of money wasted globally on things that blow up to enrich the warmongers into things the rest of us genuinely need. Food, shelter, hospitals, education, culture – the stuff that really matters.

Yeah, the girly stuff. The stuff that isn't pointed and lethal, the stuff that doesn't maim or explode like the orgasms the old men just don't seem to get any more, no matter how much wealth they hoarde, or helpless bodies they abuse, or cultures they grind into the mud. Funny that, too.

(Deep breath. Okay, this wasn't what I expected when sensibly considering why I wrote a book, but there you are.)

I started thinking in the mid-2000s about doing a suspense-type novel just for fun. The 26 May 2007 issue of New Scientist intrigued me with a feature on the amounts of essential minerals on each continent, with Australia apparently having 53% of the world's hafnium. Naturally, wars for resources were on all our minds at that time due to America's (and Australia's) criminal and criminally-stupid invasion of Iraq. But hafnium – who'd be interested in that?

As it happens, the Defense Advanced Research Projects Agency was simply fascinated – see the hafnium controversy – but announced in 2008 that induced gamma emmision from hafnium would be too hard and too costly to do. Then a year later Russian researchers released data saying, actually no, it's all quite doable. Deafening silence ever since.

As Lena muses at the end of Atomic Sea, "I think of the hafnium lying in mounds in the Nevada desert, and wonder if sometime, somewhere, a passionate scientist will unlock its secrets and we will all come to rue the day." I wonder that too.

Another strand of the story came from scientist Robert Bednarik's heartfelt 2006 study of the rock art at Murujuga – Australian Apocalypse: the Story of Australia's Greatest Cultural Monument. It detailed his long study of the region and efforts to have it protected, which still hadn't happened despite the usual political weasel words.

A recent article, Where art meets industry: protecting the spectacular rock art of the Burrup Peninsula, says a Commonwealth Senate inquiry was due to report in March 2017. It's now February 2018 and it still hasn't concluded. The inquiry is into the Commonwealth and State's responsibility to 'protect the globally significant and National Heritage listed Aboriginal rock art of the Burrup Peninsula including the impact of industrial pollution'. (Is it snarky of me to assume there won't be a good outcome?)

Bednarik's book had a fascinating page on the destructive potential of the petrochemicals stored in 2006 at the Murujuga gas plant, 760,000 tonnes of TNT equivalent or 58 Hiroshima bombs. He reports a 'leading tsunami expert' saying that an explosion of that magnitude would cause a tsunami many times greater than the famous one of Christmas 2004. I haven't seen the original research, but even if exaggerated the destructive potential would still be massive, and the amounts of chemicals stored there have only increased since that time.

It makes a good plot point, although one (American) reviewer on Amazon was cranky I'd made Americans the baddies, and said he lived near a CNG facility and didn't think it would do much damage if it blew up.

I'm awfully glad to hear that.